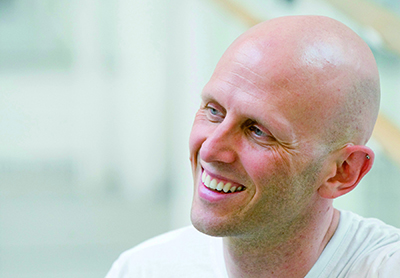 Wayne McGregor was born in Stockport in 1970 and studied dance at University College, Bretton Hall and at the José Limon School in New York. In 1992 he founded his own company Wayne McGregor | Random Dance and in the same year was appointed choreographer-in-residence at The Place, London.

Wayne McGregor | Random Dance was one of many small-scale British companies emerging in the 1990’s but two features made McGregor’s work stand out. The first was the unique quality of his vocabulary. This had its origins in McGregor’s own long, lean and supple physique and in his body’s ability to register movement with peculiar sharpness and speed; at one extreme McGregor’s dancing was a jangle of tiny fractured angles, at the other it was a whirl of seemingly boneless fluidity.

The second outstanding feature of the work was its embrace of new technology. McGregor started playing with computers when he was seven and it was natural for him to incorporate the cyber world into his own choreography. Collaborating with state-of-the art designers he experimented with projecting computer generated images onto the stage. In Sulphur 16(1998) dancers were dwarfed by the presence of a shimmering virtual giant and danced with a company of digital figures who wove and shimmered among them like visitants from another age. In Aeon (2000) digitally created landscapes transported the dancers to what seemed like other dimensions and other worlds. McGregor has also used technology to alter the conditions under which his work is viewed. 53 Bytes (1997) was created for simultaneous performance by two sets of dancers in Berlin and Canada, and was watched by audiences in both countries by live satellite link.

McGregor has always been as curious about the technology of the dancing body as he has been about machines. The stimulus for AtaXia (2004) was provided by the Experimental Psychology department at the University of Cambridge where McGregor, appointed Research Fellow, was engaged in a study of body brain interaction. Dancers are the most expert co-ordinators of body-brain states yet here McGregor became fascinated by the energy and beauty of neurological dysfunction. For Amu (2005), McGregor continued his association with science by working with heart imaging specialists, alongside a typically prolific set of artistic collaborators, to question both the physical functions and symbolic resonances of the human heart. For Dyad 1909 (2009), McGregor embarked on a study of creative cognition, with his entire creation process video-recorded and mapped by a team of Cognitive scientists and students at the University of California, San Diego, USA. Entity ;(2008) and FAR (2010) have been other steps on this journey.

In 2006, Wayne McGregor was appointed the Resident Choreographer of The Royal Ballet, the first modern dance maker to be given that post in the company's history. A string of productions, including Qualia (2003), and Engram (2005), were followed by the 2006 smash hit Chroma. Next came Nimbus (2007), and in 2008 McGregor curated a new festival for the Royal Opera House, Deloitte Ignite, which also saw the premiere of a new work, Infra. McGregor then conceived, directed and choreographed an historic joint collaboration between The Royal Ballet and The Royal Opera – the Baroque double bill of Acis and Galatea and Dido and Aeneas. McGregor went on to create Limen (2010) and Live Fire Exercise (2011) on The Royal Ballet, which included ground-breaking collaborations with visual artists Tatsuo Miyajima and John Gerrard, respectively. This year, for the Royal Ballet, McGregor choreographed Carbon Life, and Machina for Metamorphosis: Titian 2012. He also directed a new Max Richter chamber opera, Sum, commissioned by ROH2, which premiered in May. In July, he created a large-scale public dance work, Big Dance Trafalgar Square, part of London Festival 2012.

Outside the ‘pure’ fields of dance McGregor has directed opera for La Scala, Milan and choreographed movement for movies, plays, musicals and art galleries including site specific installations at the Hayward Gallery, Canary Wharf and the Pompidou Centre and movement for movies and music videos, from Harry Potter And The Goblet of Fire to Radiohead’s 2011 Lotus Flower video.

His creations for other dance companies have included work for Paris Opera Ballet, La Scala, NDT1, Stuttgart Ballet, English National Ballet, San Francisco Ballet, New York City Ballet and The Australian Ballet. Upcoming commissions for 2013 include a new work for San Francisco Ballet and a new Rite of Spring for the Bolshoi Ballet. McGregor will also be creating new works for The Royal Ballet and for his company Wayne McGregor | Random Dance.

McGregor's experiments have earned him a string of nominations and awards. He was recently awarded a CBE (Commander of the Order of the British Empire) for his Services to Dance, in the New Years Honours List of January 2011. Awards for his works include the Critics Prize for Chroma at the Golden Mask Awards (2012); three Critics Circle Awards (Amu, Chroma, Infra); a South Bank Show Award and Movimentos Award for Entity (2009); a Benois De La Danse for Infra (2009); an International Theatre Institute Award for Excellence in Dance (2009); an Arts Foundation Fellowship in 1998; two Time Out Awards for Outstanding Achievement in Dance (2001/2003) and two Laurence Olivier Awards (2004/2007).

He is the Resident Choreographer of The Royal Ballet.

In January 2011, McGregor was awarded a CBE (Commander of the Order of the British Empire) for Services to Dance.