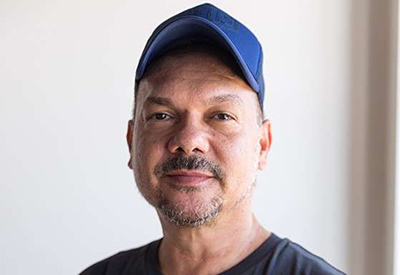 Stephen Page (born 1965) is a descendant of the Nunukul people and the Munaldjali clan of the Yugambeh Nation from South East Queensland, Australia. He studied dance at the National Aboriginal and Islander Skills Development Association (NAISDA), graduated in 1983 and then danced with the Sydney Dance Company until he was appointed Artistic Director of Bangarra in 1991. Stephen Page has since developed a signature body of works that have become milestones in Australian performing arts and he continues to reinvent Indigenous storytelling within Bangarra and through collaborations with other performing arts companies, notably directing the Indigenous sections for the 2000 Sydney Olympic Games Opening and Closing Ceremonies and creating a new dance work for the 2018 Gold Coast Commonwealth Games Opening Ceremony. He also collaborated on several films and theatre works. His first full-length film SPEAR (2015) premiered at the Toronto International Film Festival before screening at various arts festivals.

In 2017, Stephen Page was honoured with the Australia Council Dance Award for significant contributions to the cultural and artistic fabric of the nation and was appointed an Officer of the Order of Australia (AO).