A stage teeming with 64 bodies. Stephanie Lake, a leading figure in Australian dance, explores the joy and excitement of the collective experience in an extraordinary event. Breathtaking!

How do we share space? How do we cooperate? Is a crowd more than the sum of its parts? These are some of the questions addressed in Colossus, a monumental work by choreographer Stephanie Lake, created in Montreal with a local cast. This unifying piece transforms itself according to the cities it visits, from Paris to Sydney, in a spirit of sharing and exchange.

They emerge from the darkness, a dizzying mass of bodies moving in complex unison and wild individuality. Bursting with life, they embody the cohesive force of the group and echo the exquisite patterning found in the natural world—the dance of schools of fish or flights of starlings. A single movement triggers a chain reaction that shifts the ensemble from chaos to order; as if by magic, the current is transmitted from one body to another. Colossus transports us elsewhere for the duration of an utterly spellbinding evening.

A project in collaboration with the École supérieure de ballet du Québec and the École de danse contemporaine de Montréal.

A project in collaboration with the École supérieure de ballet du Québec and the École de danse contemporaine de Montréal. 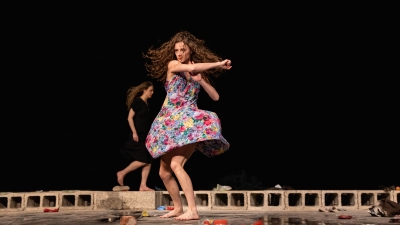