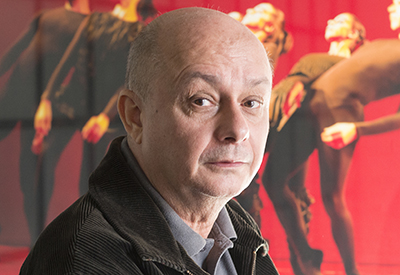 Rodrigo Pederneiras has been the choreographer for Grupo Corpo since 1978, and together they explore in diverse ways the “inner dance of the body” so characteristic of his work. Focusing on xaxado, samba, capoeira and ballroom dance, they transform those dance figures into a language that is essentially modern, transposing them into an intimate world where equilibrium and dynamics bring more meaning to the movement. He imbues the figures with humour and joy, without concealing the violence and ambiguity of this body that is ours, that has learned to dance in the streets.
Always guided by the music, Rodrigo reconstructs classical movements, making them more Brazilian, more intense, but avoiding the trap of exoticism, stereotypes or pretentiousness. In his pieces one or more dancers will separate from a group, as though magnetized by an invisible force. The group then reforms until a similar interference occurs, and rotations are rare. The stage is conceived as a central point with a well-defined foreground. Line and flow are created by movements executed by the dancers at the very beginning of the creative process, without any formal premeditation. Rodrigo Pederneiras’ work has won international acclaim.
In Brazil he has created pieces for the Ballet do Theatro Municipal in Rio de Janeiro, the Ballet do Teatro Guaíra, the Ballet da Cidade in São Paulo and the Companhia de Dança de Minas Gerais. He has also received commissions from the Deutsche Oper Berlin Company (Germany), the Gulbenkian (Portugal), the Stadttheater in Saint Gallen (Switzerland), the Opéra du Rhin (France) and the Ballets Jazz de Montréal (Canada). With Grupo Corpo, Rodrigo is able to count on the support of his assistants Carmen Purri and Miriam Pederneiras to help reduce creative tension and alleviate the efforts required to bring an evolving work into concrete form. Like tuning musical instruments prior to a concert, they transmit Rodrigo’s creative vision to the dancers. Grupo Corpo has thus developed its own dance vocabulary, conceived and developed by Rodrigo, whereby each dancer absorbs the idiom through the body, which is inspired to dance.