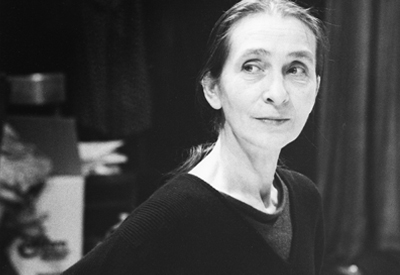 Philippina Bausch (1940-2009), nicknamed Pina, was born in Solingen, a small city in the Ruhr valley. Her works cast the somber yet tender gaze that, since childhood, she has had of the world and the human condition. As a child she hid under the tables of her father’s restaurant, which inspired the set design for her emblematic pieces Café Müller, Kontakthof and Bandonéon. A legend of 20th century choreography, she revolutionized live performance and became a leading figure in the dance theatre movement, influencing several generations of dance artists. She died in 2009 at 68.

Pina Bausch began her training at age 15 with the precursor of the dance theatre movement Kurt Jooss at the Folkwang School in Essen. At age 19 she moved to New York where she studied at the Juilliard School, and later danced with the Metropolitan Opera and the New American Ballet. Returning to Germany in 1962 she became a soloist with the Folkwang Ballett and also assistant to Jooss, eventually replacing him as director of the Folkwang School in 1969. In 1973 she was appointed head of the Wuppertal Ballet, which she renamed the Tanztheater Wuppertal. Her dance caused consternation and scandal, as she reinterpreted classics like Orpheus and Eurydice (1975), The Rite of Spring (1975) and Bluebeard (1977), introducing the concept of dance theatre starting in 1976. She ignored the critics and soon achieved worldwide success with works such as Café Müller (1978), establishing a reputation as the first choreographer with a background in modern dance to successfully penetrate the closed post-war German theatre scene.

Pina Bausch dismantled the usual codes of dance composition, presenting puzzles of discontinuous narration where dance alternated with acting and where repeated actions lampoon coded behaviours, the game of seduction and the violence of small everyday gestures. Dispensing with the concepts of characters and performers, she concentrated on the body, on memory and the life experience of her dancers. With Kontakthof (1978), 1980 (1980) and Nelken (1982), a sort of tenderness slipped into her work. Pieces such as Viktor (1986), Palermo Palermo (1989), Masurca Fogo (1998), Água (2001) and Nefés (2003) reflect the cultures of the foreign cities where they were created, works marked by flamboyance and an uncommon lightness.