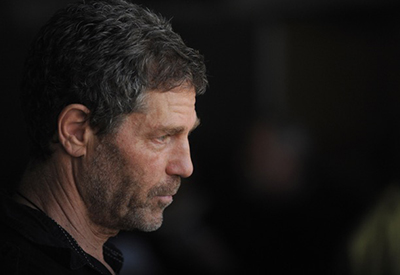 An Israeli choreographer known for his incisive style, Ohad Naharin has transformed the landscape of contemporary dance in Israel, turning preconceived ideas about dance upside down. His characteristic approach is to push the limits of dance, for he is open to everything that is human, to all cultures and art forms, to all manner of movement. Whimsical and rebellious, he is a much sought-after choreographer.

Born in 1952 on Kibbutz Mizra, Ohad Naharin began his dance training with the Batsheva Dance Company in 1974. During his first year with the company, visiting choreographer Martha Graham singled out Naharin for his talent and invited him to join her own company in New York. While in New York, Naharin studied on scholarship at the School of American Ballet, furthered his training at The Juilliard School, and polished his technique with master teachers Maggie Black and David Howard. He went on to perform internationally with Israel’s Bat-Dor Dance Company and Maurice Béjart’s Ballet du XXe Siècle in Brussels.

Naharin returned to New York in 1980, making his choreographic debut at the Kazuko Hirabayshi studio. That year, he formed the Ohad Naharin Dance Company with his wife, Mari Kajiwara, who died of cancer in 2001. From 1980 until 1990, Naharin’s company performed in New York and abroad to great critical acclaim. As his choreographic voice developed, he received commissions from world-renowned companies including Batsheva, Kibbutz Contemporary Dance Company, and Nederlands Dans Theater.

Naharin was appointed Artistic Director of Batsheva Dance Company in 1990 and has served in this role except for the 2003-2004 season, when he held the title of House Choreographer. During his tenure with the company, Naharin has choreographed over 20 works for Batsheva and its junior division, Batsheva Ensemble. He has also restaged over 10 of his dances for the company and recombined excerpts from his repertory to create Deca Dance, a constantly evolving evening-length work.

Naharin trained in music throughout his youth, and he has often used his musical prowess to amplify his choreographic impact. He has collaborated with several notable musical artists to create scores for his dances, including Israeli rock group The Tractor’s Revenge (for Kyr, 1990), Avi Belleli and Dan Makov (for Anaphaza, 1993), and Ivri Lider (for Z/na, 1995). Under the pseudonym Maxim Waratt, Naharin composed music for MAX (2007) and edited and mixed the soundtracks for Mamootot (2003) and Hora (2009). Naharin also combined his talents for music and dance in Playback (2004), a solo evening which he directed and performed.

In addition to his work for the stage, Naharin has pioneered Gaga, an innovative movement language. Gaga, which emphasizes the exploration of sensation and availability for movement, is now the primary training method for Batsheva’s dancers. Gaga has also attracted a wide following among dancers around the world and appealed to the general public in Israel, where open classes are offered regularly in Tel Aviv and other locations.

Naharin’s rich contributions to the field of dance have garnered him many awards and honors. In Israel, he has received a Doctor of Philosophy honoris causa by the Weizmann Institute of Science (2004), the prestigious Israel Prize for dance (2005), a Jewish Culture Achievement Award by The Foundation for Jewish Culture (2008), a Doctor of Philosophy honoris causa by the Hebrew University (2008), and the EMET Prize in the category of Arts and Culture (2009). Naharin has also been the recipient of the Chevalier dans l'Ordre des Arts et des Lettres from the French government (1998), two New York Dance and Performance (Bessie) Awards (for Naharin's Virus at the Brooklyn Academy of Music in 2002 and for Anaphaza at the Lincoln Center Festival in 2003), the Samuel H. Scripps American Dance Festival Award for Lifetime Achievement (2009), and a Dance Magazine Award (2009).