Weather had its world première at the Melbourne Festival in October 2012. It is co-produced by Place des Arts, which welcomed Lucy Guerin Inc. for a two-week artistic residency in October 2011.

“The ideas underpinning this work stem from a desire to explore the possibilities of the human body’s connection to the elemental forces of weather. The range of this subject is limitless and universal, but for me, weather has a natural expression through dance and movement. It can be defined as the ‘state of the air’, and in this work, this invisible drama is made visible through movement and design. The cause and effect of moving air to create pressure systems informs the choreographic structure of the work, and defines the dynamics and performance of the movement material. Weather affects our mood, dress, food, activities, sports, conversations, architecture and our identity. Many works of art and literature have used the idea of a drought, a storm, the tropics or the icy outreaches of the poles to speak about the psychology of inpiduals, relationships or societies.

Making Weather has been for me a visceral immersion into choreographed movement and the body on stage. The motivation for the material has stemmed from the physical sensation and impact of the elements on the body, abstract representations of weather through maps and diagrams and our identification of human emotions with different weather phenomena. It occurred to me many times throughout the process that the human body shares with weather the qualities of moving air, water, mist and heat, and that the air we breathe in and out becomes part of the weather at some stage.

In today’s world, weather is acting like a barometer for our environmental disasters. As the polar ice caps melt and the holes widen in the ozone layer, we have to accept that humans are now a factor in the creation and alteration of weather. Our actions have tipped the balance resulting in uncertainty in the ‘natural’ order of things.

The attempt by scientists to understand, record and predict the weather is only partially successful, and I think it is this ability to defy our logic and to overwhelm us with its force that ultimately draws me to this subject. This aspect of nature cannot be controlled or subdued and is a poetic reminder that we are not the masters of the universe. Dance shares with the weather a resistance to easy interpretation. It is about force, direction, dynamics and form. But once the body stops dancing, nothing remains, and once the cyclone is still, we are left with only air. It is motion that brings them both into being.

This work has been a return for me to a focus on pure movement and the fascination I have for choreographing the human body. These exceptional dancers have contributed to both the choreographed and the improvised movement in Weather and without their willingness, superlative talents and belief in what we do, I could not have made this work. The stimulating dialogue I have had with my design and music collaborators has also impacted strongly on the creation of this piece and I owe much to their having strong visions within their own practices to bring to this work.

“Chaos Theory informs us that a small variation in weather conditions can have enormous consequences elsewhere. In everyday conversation, a significant variable - a modest change in tone of voice, volume or topic - can result in a stormy exchange. Guerin’s new works are also connected by our common inclination to talk about the weather.”
(Real Time Arts Magazine, Melbourne, Australia)

“As with all Guerin's work, there is an abiding passion that underlies its apparent restraint, which makes Weather cumulatively more intense, and with a powerful after-effect. Guerin's work has always been concerned with relationship, with how people encounter and affect each other. In Weather, this analysis of the conflicts and desires of intimacy widens into a meditation on human beings as a species.” (Theatre Notes, Melbourne, Australia)

A pillar of Australian contemporary dance, Lucy Guerin presents choreography of enchanting beauty in an inventive set design that highlights the effects of our choices on a changing climate. A real treat.

Choreography Lucy Guerin with the Dancers from the premiere season. 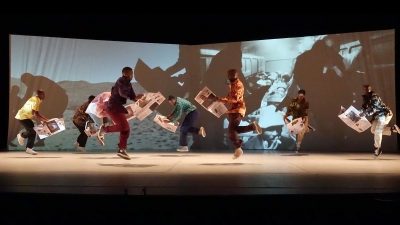