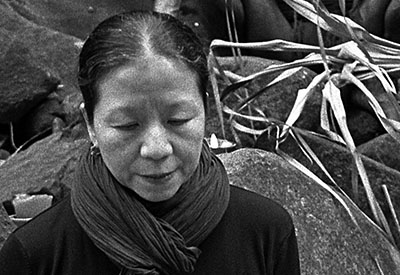 Born in Taiwan in 1950, LIN Lee-Chen is a graduate of the Department of Dance at Chinese Culture University. LIN attracted attention among the artistic circle already during the 1970s as a dance teacher and choreographer at Chang-An Girls’ Junior High School, where her dance productions - some involving as many as hundred performers - garnered national awards for five consecutive years and had an enormous influence on dance and theater productions in Taiwan. But it was her choreography and performance of Don’t Forget Your Umbrella in 1978, her first solo production, that gained LIN Lee-Chen widespread attention and earned her the reputation of being “An astonishing new talent in Taiwanese performance arts.”
Her subsequent dance pieces and choreographic work on stage and screen only enhanced her reputation. Surprisingly, at the very height of her reputation, she retired from work in order to devote herself fully to her family. However, concerned about the rapid and dramatic decline of Taiwan’s traditional culture and arts in the face of a growing invasion of Western cultural forms, LIN Lee-Chen felt compelled to return to the stage as a choreographer and director of her own company.
With the encouragement and support of many like-minded colleagues and kindred souls, she founded the Legend Lin Dance Theatre with the goal of revitalizing and reaffirming Taiwanese culture and identity. Miroirs de Vie and Hymne aux Fleurs qui Passent, the first fruits of this new mission, echo aspects of traditional Taiwanese rites and celebrate our relationship to the earth and nature’s own ritual cycles.
Following Miroirs de Vie and Hymne aux Fleurs qui Passent, LIN Lee-Chen presents the final work of the series, Song of Pensive Beholding, in 2009, the result of nine years of germination. This long-awaited piece completes the trilogy of LIN’s tribute to Heaven, Earth, and Man. In Miroirs de Vie, she explores the beauty and sadness of all things and all beings, seen and unseen; in Hymne aux Fleurs qui Passent, LIN portrays the connection between man and the spirit of nature; and in Song of Pensive Beholding, the choreographer weaves her original tribal myth with a compassionate vision, reflecting on the harm done to our environment and ourselves by human avarice. The interconnectedness of man, the spirits, and the gods permeates all of her work. In LIN's world, all beings are co-existent, affecting one another.