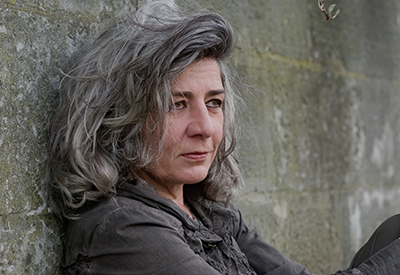 Since the beginning of her theatre studies in Gießen, her first works at the German State Theatres in the early 90s with teachers such as Heiner Müller, George Tabori and Gerhard Bohner, several years at the Mousonturm in Frankfurt, and with her free-lance productions made in coproduction with German and international theatres and festivals, she points to social sore spots, creating total works of art that go far beyond traditional dance-theatre.

Helena Waldmann’s works have won prizes and travelled around the world – to Europe, India, Iran and Afghanistan, Egypt, Palestine, Kenia, South America, Korea and Vietnam. Her opinion is in demand in symposiums, as a lecturer and in workshops in Afghanistan, Bangladesh, Ethiopia, Germany, Greece, India, Iran, Japan, Korea and Switzerland.

These journeys have also continually inspired her to make new works, such as Letters from Tentland, produced in Tehran for six Iranian women, Return to sender, her commentary on European immigration policy, performed by six exiled Iranian women, as well as Feierabend! – das Gegengift, her anarchic, delirious antidote to the dictatorship of our modern meritocracy. In the captivating BurkaBondage she presented the Muslim veil and Japanese bondage in an uptempo relationship between shackle and protection. get a revolver, a solo on dementia presented by Danse Danse in 2014, is a celebration of forgetting in which Helena Waldmann senses a possible happiness.