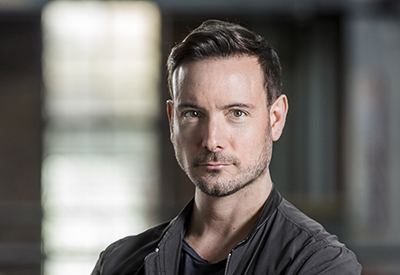 It only took Eric Gauthier a few years to make it from charismatic soloist of the Stuttgart Ballet to high-profile international choreographer and artistic director of one of Germany's most successful companies. The German Dance Prize “Future” 2011 in the category choreography for Gauthier himself as well as the German Theatre Prize THE FAUST 2011 and 2013 for Gauthier Dance mark the reputation the company of currently 16 dancers has gained since 2007.
Top companies worldwide have taken Gauthier's works into their repertoire, amongst others the Staatsballett Berlin, the St. Petersburg Mariinsky Ballet, the Stuttgart Ballet, Scapino Ballet Rotterdam or Het Nationale Ballet Amsterdam. Recent kudos include the Prize for the Best Duet at the St. Petersburg DANCE OPEN Festival 2016 for Gauthier's Punk Love and the distinction as a „Great Hope” in the yearbook 2016 of the German specialist Tanz Magazine.
Devised by Gauthier and produced by Theaterhaus Stuttgart, the first COLOURS International Dance Festival in 2015 took the public, the media and the dance world by storm. The second edition in July 2017 earned just as much praise and secured the biennial event a place among the leading European dance festivals.
As the son of a leading Alzheimer's researcher, Eric Gauthier has acquired an awareness for social issues early on. With Gauthier Dance Mobile, the company brings contemporary dance to youth centres, hospitals or to old people's homes. Eric Gauthier was awarded the Order of Merit of the State of Baden-Württemberg and is a member of the board of trustees of the Alzheimer's Foundation Baden-Württemberg.