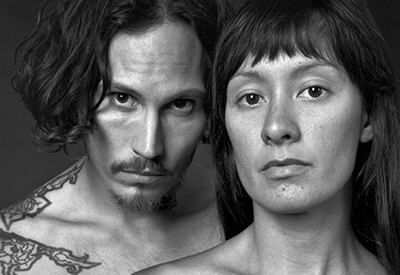 Emmanuelle Lê Phan
Québeco-vietnamese and raised in Ottawa, B-girl known as Cleopatra and co-founder of dance company Tentacle Tribe, Emmanuelle Lê Phan has forged for herself a singular career path intermingling breaking, contemporary dance and circus performances.  Although not a classical circus artist, her dance's virtuosity brought her to Cirque Du Soleil stages (Love the Beatles in Las Vegas), Cirque Éloize stages (ID) and other international special events.
But in essence, what draws her in is movement invention and choreographic finesse.   In her body, a varied array of forms: breaking, popping, capoeira, parcours, house, modern, and a desire to bond them into her own freestyle language.   This versatility is the result of a varied training spectrum: from completing a BFA in contemporary dance at Concordia University in 2003, to battling in breaking and all-style categories since 1999. Her past collaborations include co-founding Solid State Breakdance Collective and dancing for MMHOP, RUBBERBANDance, Bboyizm and Out Innerspace Dance Theatre.
In 2012, the decision to co-create with Swedish choreographer Elon Höglund, steers them into their new Tentacle Tribe universe.  Since then, the company has created many works, notably Nobody Likes a Pixelated Squid, Fractals of You and Threesixnine.   In the last five years, their work has been shown in over 80 cities worldwide along with workshop outreach and the dissemination of their 3 short films: Elon & Emmanuelle, Vanishing Points and Crack the Cypher. She created a women’s trio Origami Mami in 2017 and toured in hip-hop european festivals. Both choreographers have been artists in residence at the York University and at the Arizona State University to teach and choreograph with the students. Emmanuelle Lê Phan is now entirely dedicated to Tentacle Tribe as artistic director and administrative manager.

Elon Höglund
From a young age, he trained in various forms of martial arts (Kung Fu, Capoeira, Taekwondo) and dance styles (B–boying, Popping), which evoked in him a realization of purpose.  He went on to find further inspiration in other street styles, theatre and contemporary dance, which lead to the creation of his own movement philosophy.  Since 2001, Elon has performed and choreographed fusion–style contemporary works for Theatre, Dance and Contemporary Circus productions. In 2005, he was hired by Cirque Du Soleil to be part of the creation of The Beatles LOVE Show in Las Vegas, in which he performed and choreographed his own solo that seamlessly fused contemporary dance and hip-hop. Since then, Elon has performed all over North America, Europe and Asia with Cirque du Soleil, Cirque Eloize, Bboyizm Dance Company, Rubberbandance Group, and the Norwegian State Theatre. He has performed live on television in Sweden, Norway, South Korea and in the United States. Notably, he has worked with choreographers such as Dave St–Pierre, Daniel Ezralow, Mourad Merzouki, Victor Quijada and Koen Agustinien.  Elon is also a member of Montreal’s Fresh Format B–boy crew and Stockholm’s Concrete Kingz. In 2012, he co–founded Tentacle Tribe with choreographer Emmanuelle Lê Phan. He’s now dedicated to Tentacle Tribe, except when he works with the multidisciplinary artist, DandyPunk.