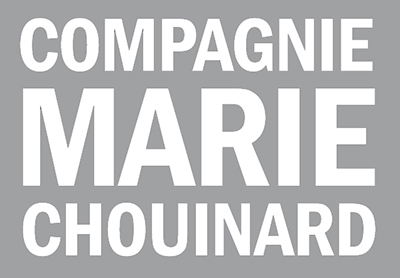 Today, COMPAGNIE MARIE CHOUINARD enjoys an international reputation. Its trajectory began in 1978, when Marie Chouinard presented her first creation, Cristallisation. This work was followed by thirty solos performed on stages at home and abroad, including Marie Chien Noir (1982), S.T.A.B. (Space, Time and Beyond) (1986), and Afternoon of a Faun (1987), landmarks in contemporary dance of the past 40 years.

In 1990, the soloist and choreographer founded her own company. Since that time, COMPAGNIE MARIE CHOUINARD has performed all over the world, and co-produces its creations with renowned partners such as the Venice Biennale, the ImPulsTanz International Dance Festival (Vienna), the Théâtre de la Ville (Paris), the Fondazione Musica Per Roma (Rome), Place des Arts (Montreal), Festival TransAmériques (Montreal) and the National Arts Centre (Ottawa).

In 2007, the COMPAGNIE moved to its own building, Espace Marie Chouinard, in Montreal.

For Marie Chouinard, each creation is an odyssey through the history of humanity that evades the linearity of a narrative. The intimate intelligence of the body, the inexhaustible complexity of its articulations and mutations command constructions that are achieved through form. The choreographer is thoroughly engaged in every aspect of a work, from music to scenography, lighting, costumes, and hairstyles, so they resonate with each other in a whole with great power of evocation.

Hailed for their technique, versatility and performance skills, the ten permanent dancers of the COMPAGNIE, trained in different somatic approaches, bring Marie Chouinard’s iconic works to the stage. The award-winning dancer Carol Prieur celebrated her 20th anniversary with the COMPAGNIE in 2015.

The COMPAGNIE has a vast repertoire of works, most still performed internationally: The Rite of Spring, Prelude to the Afternoon of a Faun, 24 Preludes by Chopin, Le Cri du monde, Étude no 1, bODY_rEMIX/les_vARIATIONS_gOLDBERG, HENRI MICHAUX : MOUVEMENTS, Soft virtuosity, still humid, on the edge and HIERONYMUS BOSCH: THE GARDEN OF EARTHLY DELIGHTS. The Rite of Spring has been performed for almost 25 years and become a classic in the history of contemporary dance.

The choreographer's works also appear in the repertoires of major ballet companies such as the National Ballet of Canada, the São Paulo Companhia dance, the Ballets de Monte-Carlo, the GöteborgsOperan and the Gulbenkian Ballet †.

Moreover, since 2015, Marie Chouinard has created works for other companies, such as the Martha Graham Dance Company and Ballets de Monte-Carlo.

In 2009, Marie Chouinard, the dancer, returned to the stage after a 20 year absence with her solo creation morning glories :)-(: and since 2012, has danced IN MUSEUM, a three-hour solo performance-installation.

An author, set and lighting designer, photographer and film director, her opus includes multimedia works (Cantique no 3, Icônes, and CORPS CÉLESTES) films (bODY_rEMIX/gOLDBERG_vARIATIONS, MARIE CHOUINARD: THE RITE OF SPRING, and the music video Jamais by Serge Fiori), a collection of poems entitled Chantier des extases, the photo-installation Paradisi Gloria, and an art exhibit entitled DRAWINGS. In 2015, Marie Chouinard designed CANTIQUE, a first application for iPad and iPhone, free from the App Store. Whatever the medium (stage, screen, digital, print, etc.), the crux of the work is always the body.

A true cultural ambassador for Quebec, Marie Chouinard has received several awards and distinctions in recognition of her contribution to the arts, including the Bessie Award (New York, 2000), the Grand Prix du Conseil des arts de Montréal (2006), the title of Officer of the Order of Canada (2007), the title of Chevalier of the Ordre des Arts et des Lettres (France, 2009), the Denise Pelletier Award (Quebec, 2010), the Conseil des arts et des lettres du Québec Award for best choreography for THE GOLDEN MEAN (LIVE) (2012), the Samuel de Champlain Award (France, 2014), the title of Companion of the Ordre national des arts et des lettres du Québec (2015), the title of Chevalier of the Ordre national du Québec (2015), the Governor General’s Performing Arts Award for Lifetime Artistic Achievement (Canada, 2016), the Positano "Choreographer of the Year" Award (Italy, 2016) and the Walter Carsen Prize for Excellence in the Performing Arts (Canada, 2016).

The name of Marie Chouinard became a dictionary entry in Le Petit Larousse, illustrated edition, in 2010 and in Le Robert in 2011.