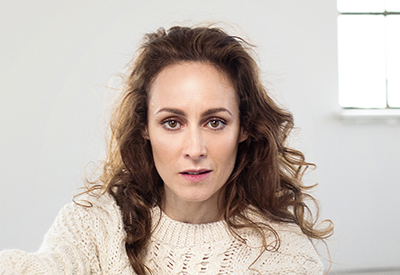 A choreographer and performer, Anne Plamondon graduates from l'École Supérieure de danse du Québec in 1994. She immediately joins Les Grands Ballets Canadiens de Montréal, before moving to dance with the Nederlands Dans Theater II in the Netherlands (1995-1998), then with the Gulbenkian Ballet in Portugal (1998-2000). During this period, Anne performs in works by over 30 choreographers including Jirí Kylian, Hans Van Manen, Ohad Naharin, Johan Inger, Gideon Obarzanek, Angelin Preljocaj and Itzik Galili. She creates lead roles for Rui Horta, Patrick Delcroix, and Pieter de Ruiter, as well as Paul Lightfoot and Sol Leon.

Between 2002 and 2015, she becomes the emblem of the RUBBERBANDance group, first as a dancer, then as its co-artistic director. Alongside choreographer Victor Quijada, she participates in the creation of ten works for the stage and is instrumental in the formulation of the RUBBERBAND method, which she now teaches throughout the world.

Anne also works with contemporary choreographers such as Jean Grand-Maître and James Kuldelka. From 2007 to 2011, Anne collaborates with renowned choreographer Crystal Pite and her company Kidd Pivot, creating Lost Action, Fault, The You Show, and A Picture of You Falling. In 2014, she participates in the choreographic creation and performs in Triptyque by Les 7 doigts de la main, a meeting of dance and circus arts with pieces by Marie Chouinard, Victor Quijada, and Marcos Morau. In 2016, she collaborates in the creation of Corps Amour Anarchie, a PPS Danse work celebrating French poet Léo Ferré. Anne also stars in the short films Small Explosions That Are Yours to Keep, Secret Service and Gravity of Center, directed by Victor Quijada and Thibaut Duverneix. In collaboration with director Micah Meisner, Anne choreographs and performs solo in Red Shoes, winning a Golden Sheaf Award at the Yorkton Film Festival in 2010.

Anne Plamondon makes her debut as a choreographer with the solos The Same Eyes as Yours (2012) and Night Mechanics (2017), both undertaken in collaboration with theatre director Marie Brassard. Artist in residence at the Fall for Dance North festival in Toronto in 2018-19, Anne creates Fiddle Embrace, a piece for 18 students of the Ryerson School of Performance, as well as Counter Cantor, in collaboration with Emma Portner. In 2020, Alberta Ballet commissions Yearn to Make a Difference, a piece for 12 dancers, while the tour of her duet Only You, performed by herself and James Gregg and originally premiered with Danse Danse, is postponed to 2022 in the wake of the pandemic.

Since 2019, Anne acts as associate curator for dance at the Domaine Forget International Music and Dance Academy.