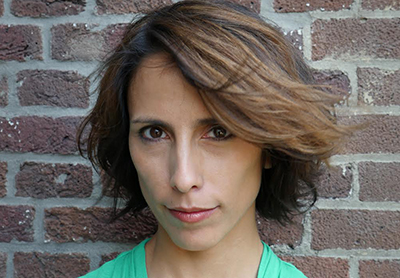 The Colombian-Belgian Annabelle Lopez Ochoa (1973) completed her dance education at the Royal Ballet School of Flanders in Belgium. After a 12-year long dance career, where she danced as a soloist with the Scapino Ballet, she decided in 2003 to focus her energies solely on choreography. In that same year she was hailed “rising star of the Dutch dance scene” by the dutch journal NRC Handelsblad and only seven years later the Temecula Performing Arts Examiner wrote: “Ochoa is truly a masterful choreographer with an edge for what dance can and should be in this constantly changing industry”.

Lopez Ochoa also creates for theater, opera, musical theater and for fashion events such as the celebrated Dutch fashion designers Viktor & Rolf’s project in the Van Gogh Museum. She belongs to the Theater-Dance collective “De Fantasten” with whom she co-directed five full-length productions which have been performed in numerous theaters and festivals throughout the Netherlands. In 2009, she created Zip Zap Zoom for BJM which has been included in the 10 best dance moments of the year by the Pittsburg Gazette, Boston Globe and the Montreal Gazette and was included in the list of the 10 dance highlights of the year in San Diego and Chicago.

Her work was several times awarded. In 2016 Broken Wings, created for English National Ballet was nominated for a National UK Dance Award in the category Best Classical Premiere. In 2015 Sombrerisimo, created for Ballet Hispanico, was awarded with the Villanueva Award in Cuba. In 2012 A Streetcar named desire was nominated for a prestigious Olivier award (UK), received the Best Classical Choreography by the Circle of Critics of the National Dance Award (UK) and was awarded Best dance production 2012, by the South-Bank Sky Arts Awards. In 2007 Lopez Ochoa was elected to collaborate with the New York City Ballet Choreographic Institute. In 2002, Replay received the first prize and public’s prize at the Bornem Choreographers Competition (Netherlands) and in 2001 Clair/Obscur won the third prize at the Hannover choreographer’s competition (Germany).