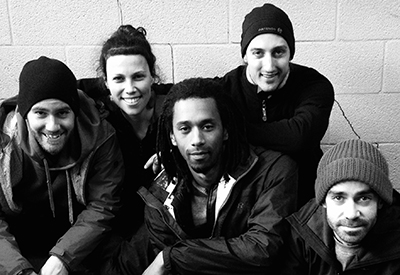 His early successes as a child figure skating champion gave big Olympic dreams to his Mom.  After some successes on the national and international competition circuits, he quit for Disney On Ice.  After too many shows as Pinocchio, he quit to become the public enemy of Canadian figure skating, daring to launch a troop of “free skaters”. 10 years later, his Mom is just starting to come to terms with it all...

Since the beginning, she knew she was not into it for the medals and the sequins. She was into it for the elite sport-school program, with less time in class.  She also skipped many skating lessons.  That’s how she got the skills while avoiding most of the ice-princess formatting.  Also a strong entrepreneur, she co-directs the company.

While kick-lining on absurd ice-rinks installed on Caribbean cruise ships, he saw Le Patin Libre on YouTube.  He quit the lucrative gig considered as the golden retirement of elite figure skaters, bought his airplane ticket to Montreal, and became a strong inspiration and an appreciated leader for Le Patin Libre.

He was one of those guys paid by the hour to ice-dance with rich figure skating girls in desperate need of a male partner.  Quite weirdly, he was also a junior Kung Fu world champion.  When he heard about a bunch of Quebecers hiring Montreal ice-rinks to turn them into underground bars and literally setting the ice on fire, he also got his airplane ticket and joined us.  At that time, the troop was already moving toward more mature projects and he fitted right it.

The only one who never figure skated!  He was hired as a technician.  He quickly became the company’s composer, with his talent as a cellist.  He learnt skating by observing the rest of the gang, and by chilling with teenage urban ice-dancers.