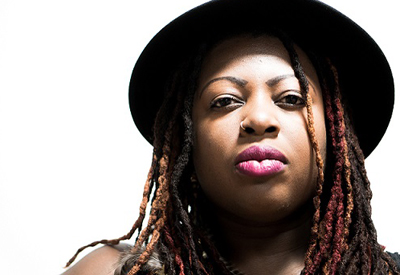 Alexandra ‘Spicey’ Landé is a Montréal choreographer and a major player on Quebec’s hip-hop dance scene. She launched her choreographic career in 2005, drawing her raw material from hip-hop culture, whose field of exploration she is constantly expanding. Her earlier work, In-Ward, won the 2019 Prix de la danse de Montréal award for Discovery of the Year and was shortlisted for the Montréal Arts Council’s Grand Prize in 2020.

As an independent choreographer, Spicey presented three works in Quebec between 2008 and 2015, including Retrospek, a remarkable piece that influenced a generation of Montréal street dancers. At the same time, the Bust A Move Festival, which she founded in 2005 (active until 2015), became the largest street dance competition in Canada and was co-presented by TOHU.

In 2015, wishing to further her artistic aspirations and bring street dance creation to the contemporary dance scene, Spicey founded her own company, Ebnflōh. With the company, she approached the hip-hop language from a new choreographic angle, at once exploratory, original and authentic, working with colleagues and peers who fueled the creative process. Ebnflōh imagines new creative processes and new ways to share its ideas about social, political and artistic issues. Spicey premiered Complexe R, a work inspired by our human obsessions, at the 2015 MAI; the show later toured to New York and Amsterdam. In 2019, she presented In-Ward, featuring six performers, co-produced with the CCOV. The show was a great success, with nine sold-out shows in Montréal (MAI and Agora de la danse).

Alexandra ‘Spicey’ Landé has been a hip-hop dance performer and teacher for over two decades. She is regularly invited to teach master classes in Canada and internationally.