Raw energy, lyricism and high speed electrify Ginette Laurin’s eight dancers, galvanized by the desire for fulfillment in encounters with the other. A moving portrait of imperfect humanity to celebrate the 30 years of the illustrious company O Vertigo.

Ginette Laurin is celebrating the 30 years of her dance company by returning to the raw physicality of her initial works. In this new dance piece, energy, lyricism and high speed electrify the bodies of eight dancers galvanized by the desire for fulfillment in encounters with the other, conveying a veritable thirst, a craving for life, for liberty, for dreams. Like the strongly contrasting lighting enveloping the stage, they paint a moving chiaroscuro portrait of imperfect humanity to Michel F. Côté’s many-hued soundtrack.

A Look Back at 30 Years of Dance Creation

A gymnast who took up dance at age 18, Ginette Laurin is a pioneer of Quebec contemporary dance. In 1984 she founded O Vertigo, a name that evokes her irresistible attraction to the void and disequilibrium. Fascinated by the beauty and expressiveness of the body, she favours the energy of movement over form, meticulously working on set design and lighting, with leeway for each spectator to freely interpret a piece. In 1989 Chagall proved to be a huge international success. In the 1990s her works became more theatrical and more emotional, with themes of finiteness, madness and disequilibrium in emblematic pieces such as Train d’enfer, Déluge and La Chambre Blanche. In 1997 En Dedans marked the beginning of a more formal period centred on identity and the double. Between 1999 and 2013 her desire to pierce the mysteries of the body and the soul took form in La Vie Qui Bat, luna, Passare, Onde de choc and KHAOS, where she used technology to reveal the hidden face of dance. The recipient of several awards during her career, Ginette Laurin also created the installation La Résonance du double in 2004, and has directed or choreographed several dance films. In 2011 she mounted a Sacre du printemps for CCN – Ballet de Lorraine. Since 2012 she has reprised excerpts from her seminal works in a choreographic collage entitled les petites formes.

“In its three decades of existence, the dance company O Vertigo has helped make Montreal one of the focal points of contemporary dance.”  (Premières en affaires, Montreal) 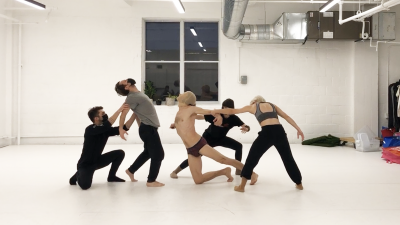